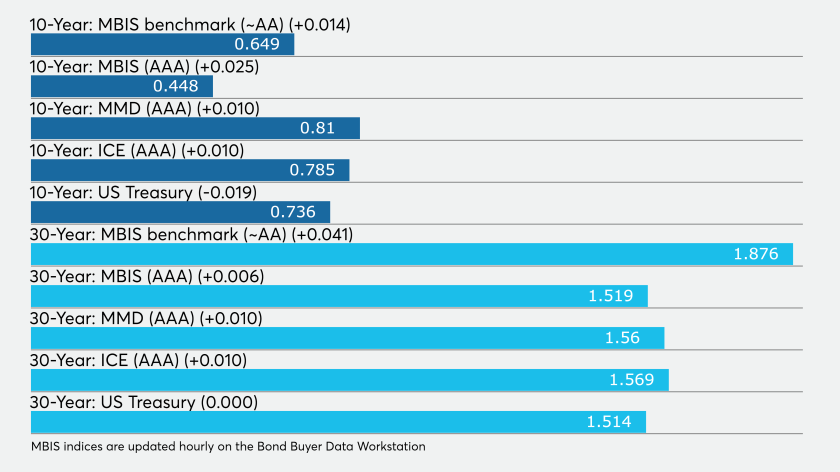 Municipals were weaker on Friday, with yields on the long end finishing out the day up one basis point. Since Aug. 12, when the muni market correction began and yields moved off record low levels, the yield on 10-year muni has risen by 23 basis points while the 30-year yield is up 29 basis points, according to Refinitiv MMD.

“While the primary market calendar is still robust, secondary market trading volume is decidedly low, owing to the weaker technical conditions and the typical lukewarm summer,” BofA Securities said in a Friday market comment. “The recovery trade in munis has stalled and the market is in a wait-and-see mode. Total returns for the ICE BofA Muni Master index is cut to 3.4% year-to-date from a high of 4.2% in early August.”

In the upcoming week, offerings from California and Florida headline the calendar, which IHS Ipreo estimates at $8.5 billion. The week’s supply is composed of $7.6 billion of negotiated deals and $861 billion of competitive sales.

“Upcoming issuance features a fair amount in taxable munis, including $2.25 billion Florida state finance board bonds (three tranches split evenly in 2025, 2027 and 2030),” Olsan said. “The sector has come under greater pressure this month as compared to tax-exempts, where the underperformance is 90 basis points.”

So far this year, issuers in California have sold $43.09 billion of debt, making it the number one state in bond sales through the end of August.

California State Treasurer Fiona Ma said Thursday the California State University (Aa2/AA-/NR/NR) sale of $1.3 billion of revenue bonds to fund capital improvements and refund bonds is expected to save $71.2 million in debt service costs over the next 22 years, or $64.1 million on a present value basis.

“Funds from this bond sale will soon be put into action to help our students, staff, and faculty in the CSU system,” Ma said. “They will finance vital projects such as the expansion of student housing, the construction of new parking structures, sports and recreational facilities, and additional office space for research and teaching.”

The CSU system is made up of 23 campuses and eight off-campus centers located throughout the state. In the 2019-20 fall semester, the system had about 430,000 undergraduate and 40,000 graduate students.

Separately, Ma, chair of the California Health Facilities Financing Authority, announced the approval of a sale up to $376 million of tax-exempt and taxable conduit revenue bonds for PIH Health Inc.

Proceeds of the CHFFAdeal, which could take place the week of Sept. 14, will finance the renovation, expansion and equipping of multiple health facilities in Los Angeles County. PIH also will use the bond proceeds to refinance existing outstanding debt, including that of Good Samaritan Hospital after it recently joined PIH’s network.

“This bond will result in a large savings to the hospital as a result of the refinancing of previous debt, leading to an increased ability to give back to the community through financial assistance, unreimbursed costs of public programs, and through other community benefits,” said Ma.

By issuing through CHFFA, Ma said, PIH intends to take advantage of the very low borrowing rates in the current fixed-rate municipal market and restructure outstanding debt for an estimated present value savings of about $8 million.

The CHFFA bond financing program was set up to provides eligible health facilities with access to low interest rate capital markets through the issuance of tax-exempt and taxable revenue bonds. Since inception in 1979, CHFFA has issued roughly 560 bonds with a value of more than $42 billion.

Turning to other sales in the upcoming week, the state of Florida (Aa3/AA/AA/NR) is coming to market with a $2.25 billion deal.

BofA Securities is set to price the state’s Board of Administrative Finance Corp.’s Series 2020A taxable revenue bonds on Wednesday. The deal consists of three maturities — 2025, 2027 and 2030 — each of $750 million.

Proceeds will provide an additional source of capital to the Florida Hurricane Catastrophe Fund to reimburse residential insurers for any possible losses due to future storm activity.

“Obviously we are still in hurricane season,” said John Hallacy, founder of John Hallacy Consulting LLC. “They always like to have a fair amount of cash on hand to pay claims initially if they need to. So they like to access the market here and there in anticipation [of any disasters]. If they don’t wind up using the proceeds, they just pay the bonds off.”

He said the maturities were usually short on these type of issues.

Participation in the fund is mandatory for almost all residential property insurers in Florida; the FHCF’s liability is limited by state statute.

So far this year, issuers in Florida have sold $10.34 billion of debt, making it the number seven state in bond sales through the end of August.

Proceeds of the sale, which is expected to come to market on Tuesday, will finance some of the costs of a construction project that Delta is undertaking at LaGuardia’s Terminals C and D.

So far this year, issuers in New York have sold $31.84 billion of debt, making it the number three state in bond sales through the end of August.

Hallacy also noted a fair amount of housing issues were on the slate for the upcoming week.

Secondary market
Municipals were again weaker out long, according to the final readings on Refinitiv MMD’s AAA benchmark scale Friday.

“Yields on the ICE muni curve are up by about a basis point in the back end and are basically unchanged in the front end,” ICE Data Services said. “Muni percentage of Treasury yields is generally above 100% across the curve.”

Munis were little changed on the MBIS benchmark and AAA scales.

Bond Buyer indexes move higher
The weekly average yield to maturity of the Bond Buyer Municipal Bond Index, which is based on 40 long-term bond prices, rose three basis points to 3.54% from 3.51% the week before.