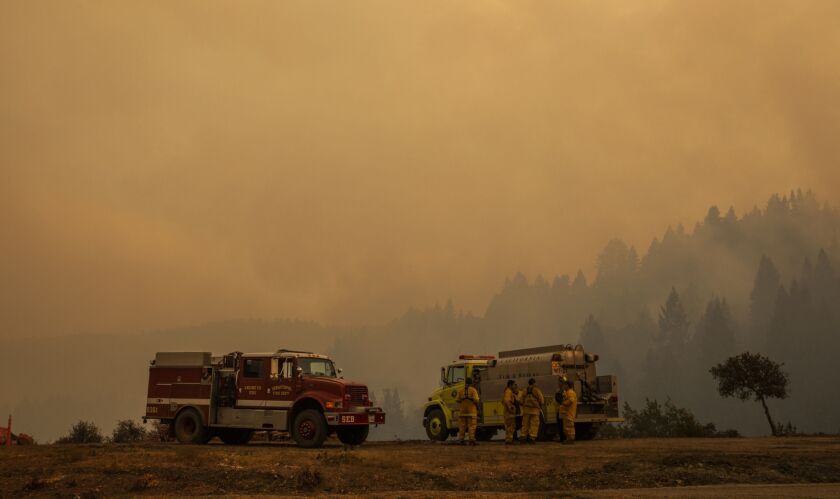 California wildfires that have scorched 1.5 million acres will compound the challenges for local governments already reeling from the coronavirus pandemic, but Moody’s Investors Service says in most cases they will emerge with their bond ratings intact.

The latest burst of blazes was sparked by a rare, powerful storm that generated lighting strikes throughout northern California without accompanying rain.

Firefighters are waging battle against an estimated 7,000 fires of varying sizes throughout the state. The blazes have resulted in seven deaths, the destruction of 1,600 structures and the evacuation of 136,000 people by Thursday, according to the California Department of Forestry and Fire Protection.

The evacuations come at a time when California Gov. Gavin Newsom and some mayors have ordered that all residents wear masks and continue to social distance in efforts to slow the spread of the pandemic.

In prior years, wildfire evacuees would have filled schools or recreation buildings, but this year people evacuated from their homes are filling hotels. The latter could result in reduced revenues for cities that benefit from bed taxes, according to Moody’s report.

In most cases the cities’ strong liquidity, large tax bases and the history of aid from Federal Emergency Management Agency and state government will protect credit quality and ratings, Moody’s analysts said.

Funding from the federal government may not be enough to protect smaller cities like Paradise, which was decimated by the 2018 Camp Fire.

Moody’s analysts also noted that California wine country areas like the Napa Valley or Sonoma County that are heavily dependent on tourism could also face an additional hurdle to achieving full economic recovery.

Moody’s analysts wrote that Santa Cruz County requested out-of-town tourists vacate occupied hotel rooms to allow for evacuees as the CZU fire expanded and San Mateo County has set up evacuation centers to serve as coordination centers rather than overnight facilities because of the risk of further spreading COVID-19.The use of hotels to shelter people evacuated as a result of the fires could also mean potentially higher costs for local governments and lost hotel bed tax revenue, Moody’s wrote.

Moody’s noted, however, that California local governments generally maintain healthy cash positions and benefit from large assessed values, which have historically been a bedrock of credit strength across the state.

The strong liquidity positions have enabled most issuers to meet near-term emergency expenditures as they await federal and state funding, Moody’s said. The California Legislature has historically approved funding to backfill lost revenues for cities decimated by fire, in the budget year following the fire.

“These declines were easily absorbed into the ESD and HSD’s large $9.7 billion and $31.4 billion tax bases,” Moody’s analysts wrote. “The ultimate impact on AV was negligible as fire-damaged properties were repaired and newly built improvements were added to the districts’ taxable rolls.”

Local governments with smaller tax bases and weaker finances are more vulnerable and are not as well placed to absorb wildfire destruction, Moody’s wrote.

Paradise’s modest $2.1 billion assessed value was almost entirely eliminated by the 2018 Camp Fire. The unusual extent of the damage to the town, which also devastated its financial position, brought into question the town’s short-term ability to pay debt service, Moody’s wrote.

Money deposited by Paradise Aug. 1 for the bond payment due June 1, 2020 was cited by the ratings agency in the ratings boost and revised outlook. The rating agency also noted that the bonds are insured by Ambac.

Moody’s considers the availability of FEMA funds for emergency and disaster relief an important credit strength for local governments.

Moody’s analysts expect that state disaster assistance for local governments will likely fund a substantial portion of the remaining 25% of associated costs.