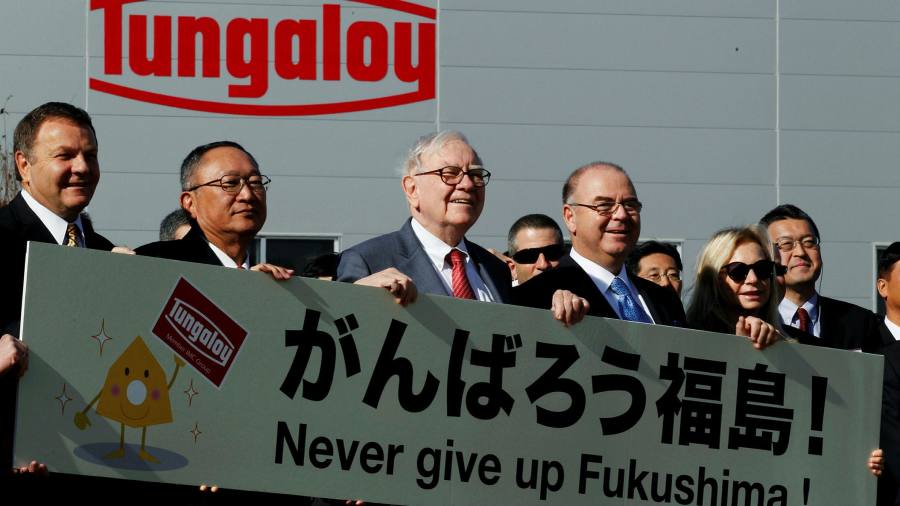 The investment in Japan also marks a decisive lunge beyond the familiarity of his home market in the US, where technology stocks have surged to record highs but other industrial investments have suffered heavy setbacks because of the Covid-19 pandemic.

Berkshire Hathaway, through its subsidiary National Indemnity, holds a 5 per cent-plus stake in each of the five sogo shosha, or general trading houses, according to Japanese regulatory filings submitted on Monday. The stakes, acquired over the past 12 months, were worth nearly ¥670bn ($6.3bn) combined as of Aug 24, the filings showed.

The group said it may increase its holdings to 9.9 per cent in any of the five trading houses — shares in which have fallen heavily during the pandemic — and plans to hold the investments long term.

“The five major trading companies have many joint ventures throughout the world and are likely to have more of these partnerships. I hope that in the future there may be opportunities of mutual benefit,” Mr Buffett said in a statement late on Sunday.

In Tokyo trading on Monday, shares in Marubeni rose as much as 14 per cent, while Sumitomo gained 11 per cent, Mitsubishi 10 per cent, Mitsui 8.7 per cent and Itochu 6 per cent.

Mitsui and Sumitomo confirmed Berkshire Hathaway’s investment but declined to comment further. Mitsubishi said it would work to enhance corporate value. Marubeni declined to comment. Itochu was not immediately available for comment.

The trading houses were written down as dinosaurs, but here they are: still around and making money. They tend to evolve as businesses and they actually do it well

Mr Buffett made his first visit to Japan in 2011, eight months after the Tohoku region was devastated by a massive earthquake. That tour triggered speculation that the Berkshire Hathaway founder, famous for his preference for deep value stocks, had spotted opportunities in a heavily discounted Japanese stock market.

Although Mr Buffett did not immediately make the large investments many expected, speculation over his interest in Japan erupted again last September when his company raised about $4bn in the biggest ever yen-denominated straight bond issuance by a non-Japanese institution.

“If Mr Buffett were to return to his very own first principles, then Japan is a very obvious and compelling place to do so,” said John Seagrim, a Japan equities broker at CLSA, at the time of the bond issuance.

Berkshire Hathaway said it has ¥625.5bn of yen-denominated bonds outstanding, maturing at dates beginning in 2023 and ending in 2060.

Jefferies analyst Thanh Ha Pham said that while the Japanese trading houses would face pandemic-related challenges, in the longer-term each had hundreds of subsidiaries and affiliates across all industries whose businesses were essential to the functioning of the economy.

He said Mr Buffett was probably making his investment in the five largest trading houses following a calculation of intrinsic value, but also because he saw little qualitative difference between them.

“If you go back to 2003, then there was a perception that we didn’t need trading houses any more because ecommerce would come and everyone would operate through that. The trading houses were written down as dinosaurs, but here they are: still around and making money. They tend to evolve as businesses and they actually do it well,” said Mr Pham.