In my coverage of the Sprott Physical Gold and Silver Trust (CEF) back in May, I shared various supporting ideas that justified the fund as a buy. The central thesis was, as a bullion-backed fund, CEF would move up naturally purely because of a bull move in the precious metals. It has been just under four months since that article was published and metal has rallied hard. As expected, CEF has been a beneficiary of that run. With the extreme nature of the price rises in gold and silver in the last few weeks, I felt it necessary to update my view on the fund currently. I’m not going to revisit every single point that I made in my previous article, but I do want to take a fresh look at the main argument.

A Fresh Look at the Data

The fundamental reason I picked CEF was because it has physical allocation to precious metals. Gold has performed exactly how I expected it to back in May. It has moved up in response to the meteoric rise in the Fed balance sheet. Based off that balance sheet move, I called for a per ounce price of $2,200 and we got pretty darn close.

As you can see above, the brakes have been put on the rise in gold. I believe this is entirely temporary. But I wouldn’t rule out a brief move lower before new highs in the coming months. More on that idea later.

Also, as expected, the move in silver was even stronger to the upside than the move in gold. This is highlighted by the collapse in the gold-to-silver ratio. That ratio is currently standing at about 71, which is far more in line with historical norms. 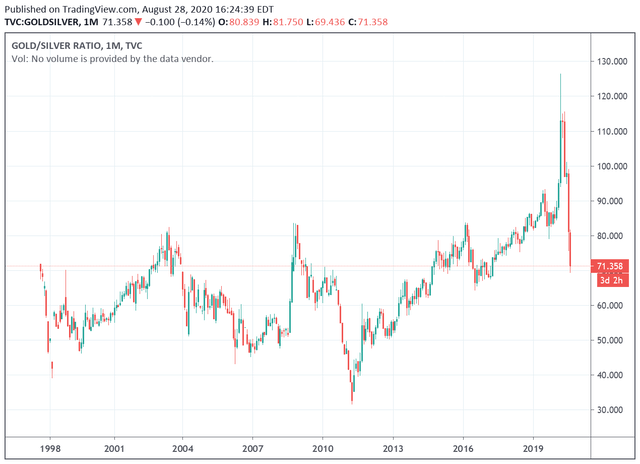 Even still, the gold-to-silver ratio has plenty of room to move down before challenging the lows from 2011. Since just under 34% of the assets held by the trust are allocated to silver, a continued collapse in the gold-to-silver ratio means CEF can continue to outperform gold in a metal bull run. When I wrote my previous article, the percentage of silver in the fund was about 29%.

Because silver has performed so well, the silver weighting is now higher even with a larger percentage of gold having been added to the trust. Because of the strength in silver, CEF has outperformed gold very nicely since publishing. 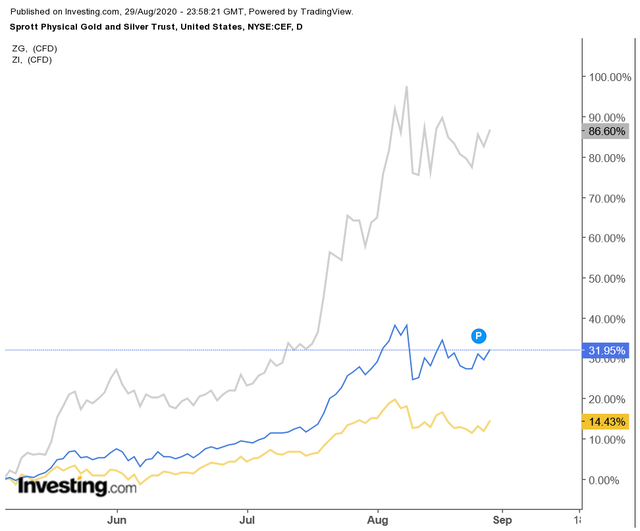 I’d be remiss if I didn’t mention that Sprott also offers a pure silver play via the Sprott Physical Silver Trust (PSLV). You can choose to go that route if you wish. I prefer CEF because I like allocation to both metals.

The relationship between gold and bonds is a major factor moving forward. Even if the Fed doesn’t continue aggressive asset expansion, there is still a clear bull case for gold and silver given what the bond market is telling us. As long as the breakeven rate is this far above the yield on the 10-year note, CEF should be in good shape.

The above chart shows just how wide the gap is between the yield on the 10-year and the breakeven rate of inflation. We know through historical data that negative real rates push investors to inflation hedges like gold. Consider the chart below. This is the inflation-indexed 10-year with gold’s performance as an overlay.

Knowing the behavior of inflation hedges with negative real rates is just one part of the puzzle. The logical next step is trying to guess where the real yields on the 10-year note are going to go. Lucky for us, we received some fresh market sentiment soothing from Federal Reserve Chairman Jerome Powell while at Jackson Hole this week. In his speech, Powell talked about the Fed changing inflation policy. Rather than a 2 percent inflation goal, the central bank is willing to let inflation run hotter than 2 percent if it stimulates job growth and economic activity. Interestingly, the Fed doesn’t seem concerned with how 2 percent is obtained so long as it is obtained. In this regard, Jerome Powell said:

In seeking to achieve inflation that averages 2 percent over time, we are not tying ourselves to a particular mathematical formula that defines the average. Thus, our approach could be viewed as a flexible form of average inflation targeting.

Powell added the Fed will “steadfastly seek to achieve a 2 percent inflation rate over time.” The Fed is in a tough spot. The dual mandate of full employment and stable prices seems to be falling apart at the seams. The central bank wants the average inflation rate elevated in an attempt to stimulate job growth, yet it won’t commit to a formula defining what that average inflation is. That’s not a statement that leads me to believe that price stability is in the cards any longer.

Hypothetically, even if the central bank is able to achieve its higher inflation goal, there is absolutely no guarantee that US bond yields move higher to make up the difference in the breakeven rate. This kind of monetary policy should continue to benefit gold and silver long term.

I am very careful to avoid political commentary in my Seeking Alpha content. Having said that, I believe there are very few potential political catalysts that are bad for precious metals between now and the end of the year. If reports are to be believed, the sticking point in Congress isn’t whether or not the liquidity fire hose should be turned on – the debate is over how many trillions are going to come out of the hose. There are still about 14.5 million continued unemployment claims. The labor force participation rate is still well below pre-COVID levels.

The economy is not roaring back for workers in the way the powers that be probably hoped. To paraphrase Milton Friedman, nothing is as permanent as a temporary government program. No matter who wins in November, I don’t imagine stimulus programs in the trillions are coming to end as long as there are millions of Americans out of work.

There are a few things that I look for when I take a peek at charts. The daily chart in CEF shows a consolidation over the last 3 weeks or so. As a long-term bull, I like seeing the price hold firm as the bands begin to re-tighten. 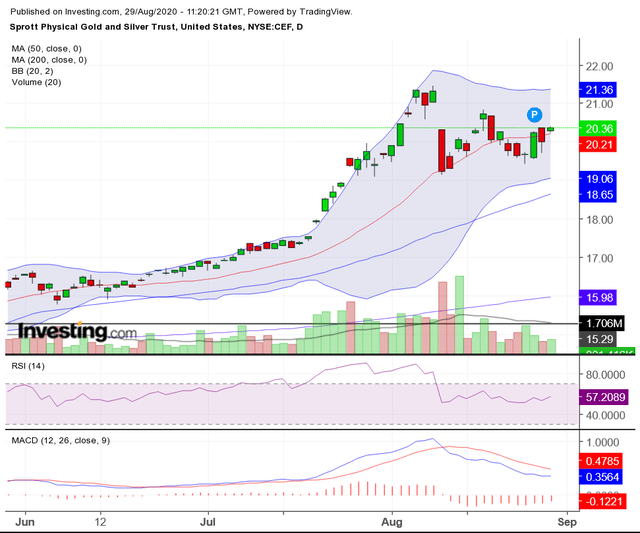 On the other hand, though it is trending higher, the 50-day MA leaves quite a bit of downside potential from here if the metals do ultimately take more of a breather. In my recent Bitcoin (BTC-USD) article, I showed the cryptocurrency and gold on 1-month chart timescales. I think it provides valuable insight into a longer-term story. 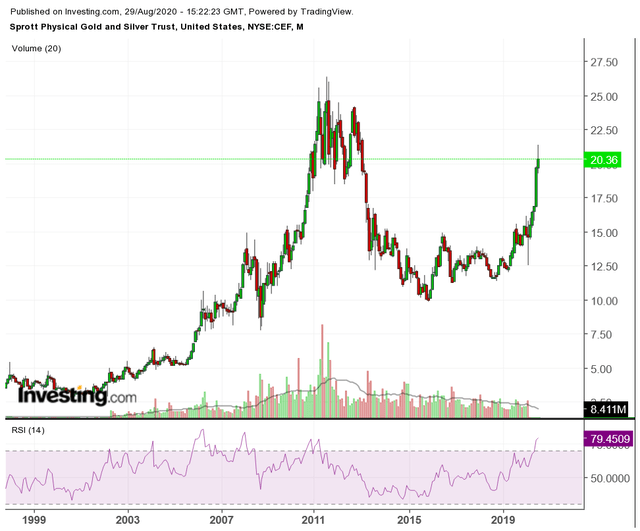 The strength in CEF in the last two months is clear. There is still one more session before we close the book on August trading, but as of submission, a monthly RSI-14 at 79.45 would be the highest closing level since 2008. Despite that, the candle isn’t convincing me that bulls have clear sailing ahead. As I stated in that bitcoin article, even though gold ultimately made new highs in 2011 after the extreme overbought conditions in 2008, the new highs didn’t come until gold had a sizeable pullback over a several-month stretch. A repeat of that scenario wouldn’t surprise me now.

Furthermore, in the event that we get a reversal of fortune for the five to ten tech stocks that are driving equities higher, a broad market sell-off would likely trigger buy opportunities in the metals as well. Though it seems like “stocks only go up,” I wouldn’t rule out the possibility that we’re getting close to the top of the tech equity run.

Another look at the NAV

In my last article, I hypothesized that CEF could start trading at a premium to Net Asset Value on a more regular, or even permanent, basis. Though I still see this as a possibility if we see continued strong demand for physical metal, I do want to provide an updated look at the current price to the NAV. 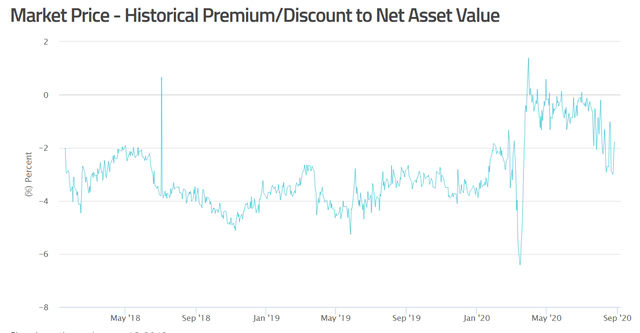 The share price against the NAV has rolled back down to discount rather than premium. This should serve as a welcome sight for investors who buy on fundamentals. Furthermore, higher-net worth investors can look to CEF with the intention of taking delivery in the event of physical market shortages down the line. Though, I would imagine shares will again be trading at a healthy premium to NAV before that kind of play becomes necessary. The point is, there is a very feasible scenario in the future where NAV premium becomes the norm. We’re clearly not there yet, and that’s a good thing if you’re a buyer.

Though I’m undoubtedly bullish gold and silver long term, both have enjoyed a very aggressive run-up in recent weeks and months. It is entirely possible that there is a short-term reversal of those trends before new highs in the coming months. In the event of that reversal, CEF would be a strong buy, in my opinion. And I would personally be aggressively adding to my position. I believe the bull case for gold, silver, and CEF specifically, is very much intact. It is highly unlikely that we’ve already seen the peak in the Fed’s balance sheet. The central bank is committed to higher inflation. Real rates on treasuries are negative. There are few politicians who I’d imagine are willing to say “no” to free money in an election year during a recession. This means more stimulus is very much in the cards. All of these catalysts are bullish for gold and silver. CEF is going to make new highs. The million-dollar question is whether there will be a bigger pullback before that happens. If, like me, your time horizon is longer than a few months, any pullback is an opportunity.

Disclosure: I am/we are long CEF. I wrote this article myself, and it expresses my own opinions. I am not receiving compensation for it (other than from Seeking Alpha). I have no business relationship with any company whose stock is mentioned in this article.